The sport of darts began as training in the martial arts of archery. Darts began in Medieval England. Historians surmise, because they don't know for certain, that those teaching archery shortened some arrows and had their students throw them at the bottom ofan empty wine barrel. 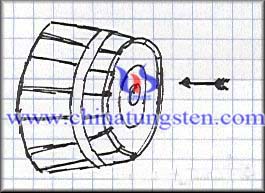 The fact that the bottom of an empty wine barrel was used is a clue to how the game developed into a pastime. It is thought that the soldiers took their shortened arrows with them to the local drinking establishment to both exhibit their skill and have fun at the same time. When the bottoms of wine barrels proved to be inconvenient or in short supply, some inventive dart thrower brought in a cross-section of a moderate sized tree.

The "board" provided rings, and when it dried out, the cracks provided further segmentation. This cracked and dried board began to evolve into what we think of as the current dart board.

A game as fun as darts could not be hidden from the upper classes and they soon put their own stamp on the game. The oft married Henry VIII was reputed to enjoy the game immensely. So much so, that he was given a beautifully ornate set by Anne Boleyn.

Like much of American History, the roots of darts in America can be traced to the Pilgrims. These hardy colonizers were reputed to have played the game on the Mayflower as it made its ocean crossing. Like the game of horseshoes, it was then played avidly in America whenever leisure time was available.

However, darts remained largely an Anglo-American sport until the Victorian age when it was spread world-wide by the great expansion of the British Empire. It seems that the "sun never set on the British Empire". At the same time, there was never a time when a dart was not in the air. Many native populations were exposed to the game and found enjoyment in it.

Around 1900 the rules and darts began to settle into what they are today. Yet according to Christopher G. Carey, author of American Darts Organization Book of Darts, "The international throwing line of 7 ft. 9 1/4 inches was established in the 1970s to make it standard for international competitions; depending on the country (or at times, even the venue), the throwing line was anywhere from 7 ft 6 in. to 8 ft. Also, throughout the early part of the 20th century, there were many different types of dartboards until the 'clock' board became the standard...It really wasn't until after World War II that many of the rules of darts became standardized." Now people all around the world can enjoy the sport of darts in international competitions, in leagues, or in private parties and all be on an equal footing.