Dart board basics as follows: 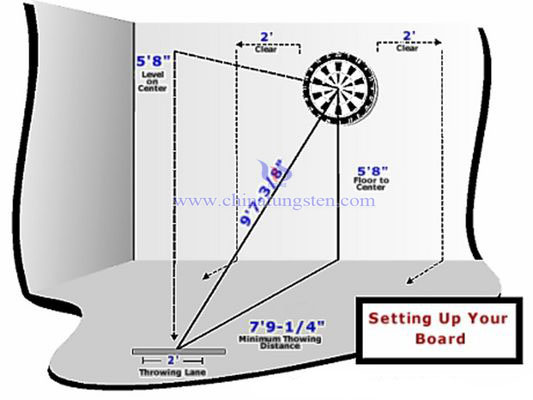 The above diagram shows the typical "18 inch" diameter dart board basics.

The face of the dart board is divided into 20 wedge-shaped "slices" measuring 18 degrees each.

The colored areas are separated by a metal framework called the spider. The colors of the board sometimes vary, depending on the manufacturer, but the above diagram uses the most common color pattern.

The outermost area of the dart board (the black area with the white numbers), has no point value whatsoever. If a dart lands in this area, it is referred to as a "flat tire".

The double point ring (and everything it surrounds) is called the island and darts landing in here will always have some point value.

The green and red parts at the very center of the board are known as the bullseye. (also referred to as the bull or the cork.)

The outer ring (green section) of the bullseye is called the single bull and a dart landing there scores 25 points.

The triple ring as its name implies, has three times the point value of the number associated with it. In the above diagram, if a dart landed in the exact area where the line is pointing, it would score 12 points. (The triple ring is sometimes called the "treble ring" - particularly in Great Britain.)

Similarly, based on dart board basics, if a dart landed in the double ring area indicated by the line, it would be worth 8 points.