Checkout is a short very simple game that may be played by any number of players or teams.

The Object of Checkout Dart Rule
Is to exactly hit 5 target sums in as few darts as possible.

The Scoring of Checkout Dart Rule
5 random numbers are chosen between 1 and 180 and written down the center of the board. These are the "target sums" that must be hit to score.

The target sums may be chosen in many different manners and may be adjusted for players ability. For example, keeping the sums under 60 would mean that a round may be completed by hitting only singles (ie: three 20's would score 60), no doubles or triples are needed. By keeping the sums under 100 would mean that no triples need be hit, only doubles and singles. The standard way is to choose one sum that may be hit by one dart, two that require two darts and three that require three darts.

The players names are written across the top of the score board in order. Playing order is determined by a throw at bullseye, closest dart plays first.

5 columns are drawn below each players' names to indicate the 5 attempts each player has to hit target sum.

This is an example of what the score board might look like at the end of a game: 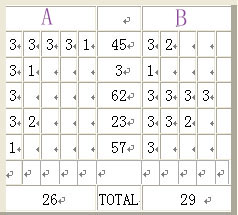 Once all five target sums have been completed (either by scoring them or using up all five attempts) the game is over. The total number of darts used is added up for each player (or team) and whoever has the LOWER score wins the game (less darts were used to complete game). In the example game above, Fred won.

Strategy of Checkout Dart Rule
Try to factor in numbers that can easily hit into how you arrive at the target sum.