This is a fun game of British origin that may be played by any number of people.

The Object of Castle Dart Rule
To be the first player to build a castle (represented by a 5x5 pyramid of boxes).

The Scoring of Castle Dart Rule
Playing order is determined with a throw of one dart each at bullseye, closest to the bullseye goes first, furthest goes last. Names are written on the board in throwing order with a representation of their castle next to their name: 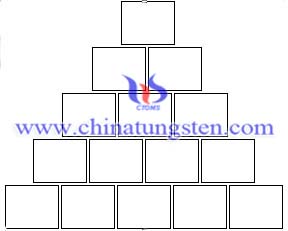 The Play of Castle Dart Rule
Each player throws one dart with the wrong hand to set a random number. It does not matter if the dart lands in the double or triples ring for this throw. Only the raw number matters. This number is written with the players name and castle and is the target for that player for the remainder of the game.

After all players have set their target numbers, they throw three darts each turn to try to build a castle. Each dart that hits the players target number checks off one box in the castle. The thin outer "doubles" ring counts as two and the thin inner "triples" ring counts as three. The first player to build their castle (that is to check off all 15 boxes) wins the game.

A player may choose during any turn to knock down a piece of another player's castle instead of trying to build. This is done by hitting the other player's target number with doubles and triples counting in the usual way. Keep in mind that if a player has no boxes checked, you can't knock down what he/she doesn't have. For example, if a player has 3 boxes checked and you throw a single and a triple of his target number for a score of 4, the player does not have to throw any extra.

Strategy of Castle Dart Rule
Keep an eye on how fast the other players are building. If a player is getting too far ahead, throw a dart or two to bring him/her down.